With apologies to Johnny Nash for the title, this edition of Cautionary Tales explores the concept of clear liquids prior to sedated procedures.  What is a clear liquid?  What impact does clear versus not clear have on gastric emptying time?  And, does clear really mean what we think it means? 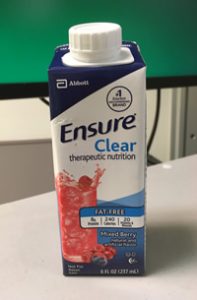 This was the first time our team had seen this particular product, though now that I know to look for it, I’m seeing more of these types of things at drug stores, etc.  There are several different brands of products, all containing a significant amount of protein but no fat, and all in which the word, “clear,” features prominently in the product name.  Some are pre-mixed, some come in dry packets that are then mixed with water.  They typically contain whey or soy protein with no fat content, so they are all technically clear in the sense that you can see through them.  But can they still be considered clear liquids with regard to pre-procedure NPO status?

This very question was the topic of a recent study performed at Cincinnati Children’s by Du et al. (1)  They examined the gastric emptying times and profiles of 10 fluid ounces of apple juice, 2% milk, and Ensure Clear in 48 healthy pediatric volunteers age 8 to 14 years who were fasted overnight beforehand and who had no known risk factors for delayed gastric emptying.  Gastric volume was measured via ultrasound at baseline, after ingestion, and then every 30 minutes thereafter.  Gastric emptying time ranges were pretty comparable at 90-180 minutes for apple juice, 90-240 minutes for Ensure Clear, and 90-210 minutes for 2% milk.  Early on, apple juice did clear faster than Ensure Clear which itself cleared faster than 2% milk.  However, in looking at volumes at 90 minutes and beyond, there was no significant difference between the three liquids.  The 95% probability of return to empty baseline times were slightly but not significantly different at 177 minutes for apple juice, 199 minutes for Ensure Clear, and 202 minutes for 2% milk.  The authors concluded that, “the stomach is essentially clear by 3-3.5 h for all three drinks studied” and that “the differentiation between liquids in current guidelines is not supported by this study.”

What does this mean for our clinical practice?  Practically, a child is likely at no higher risk for delayed gastric emptying and aspiration if the “clear berry flavored juice” they drank two hours ago was actually one of these “clear” protein containing products.  But, especially for GI imaging, children who are at baseline risk for delayed gastric emptying, and airway instrumentation/anesthesiology procedures, the protein content in these products may lead providers to classify them as “not” clear liquids, impacting procedure start times based on institutional NPO policies.  So, we should try to be “clear” with families what exactly we mean by a “clear” liquid!